The Doctor is Still In 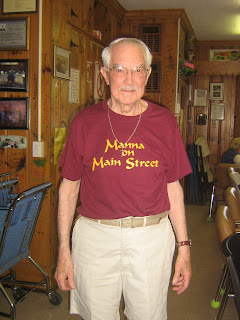 The soup we serve at Manna on Main Street is usually made by volunteers. While most of the time their creations are very good, there are instances when the soup needs some attention. That is when we call on Ralph, our soup doctor. For more than 20 years Ralph has been a regular volunteer at Manna on Main Street. In his earlier years he would stop in every day and walk back to the kitchen to inspect the soup. If it needed something... more seasoning, more vegetables or a little thickening, Ralph would doctor it up.

Now in his mid-80s, Ralph comes in only a day or two each week. He spends a lot of time at home taking care of his wife. In addition he helps aging family members by driving them to doctor appointments, to the grocery store or wherever else they need to go. When Ralph does come in, he doesn't spend as much time on the soup, but he continues to doctor us with his mild, caring manner. There are times when we all need a little something... an encouraging word or a gentle pat on the back. It's good to have a doctor around.
Posted by Manna on Main Street... at 8:05 AM No comments: 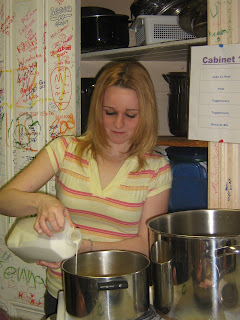 Lizz came to us in the summer of 2007 to help teach our summer cooking program. She returned the following year to lead the summer sessions again. In the fall of 2008 Lizz became a part-time employee, working under the co-op initiative for the Culinary Arts program at North Montco Technical Career Center (NMTCC). Lizz will be graduating this year and in the fall begin attending the Culinary Institute of America.

This week there was an event at the NMTCC, celebrating the students and their employers for their participation in the co-op program. Many kind words were said about the student's efforts and personal growth, and how the employers contributed to their advancement. One point not mentioned, however, was the impact the students had on the businesses they worked for. I think about what Lizz has done at Manna on Main Street; not only in performing her job responsibilities, but in the things she has taught us. A number of times we found ourselves struggling with a recurring problem, when Lizz would offer a simple, yet insightful suggestion on how to solve the dilemma. But more importantly were the significant contributions she made revolving around how she treated people - her kindness when dealing with the clients who came to eat at Manna, her helpfulness in working with the youth who came to serve, and her patience in interacting with some of the older volunteers who needed extra guidance and hand-holding.

We will miss Lizz when she moves on in the fall, but for now we celebrate her upcoming graduation and the joy she brings us each day.
Posted by Manna on Main Street... at 7:48 AM No comments: 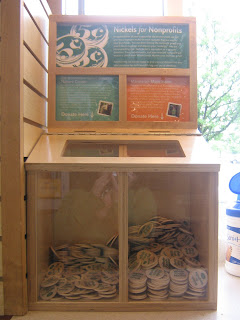 Unexpected help shows up, well, unexpectedly. We received a phone call from the local Whole Foods store. They're ramping-up a program to help the environment and also nonprofit organizations. The concept revolves around eliminating plastic bags from the waste stream: if you bring in your own shopping bags, they will give you a wooden nickel for each bag. You then have a choice of donating that nickel to a couple of worthy causes.

While the wooden nickel program has been promoted in other Whole Foods locations, it is new to the Montgomeryville store. Since they are in the experimental phase and aren't certain how things will go, they randomly selected Manna on Main Street as a beneficiary (along with a new organization, the Wissahickon School District Nature Center).

Set this along side two other events taking place this weekend. A racquetball tournament to benefit Manna is taking place at Philadelphia Sports Club in Chalfont. In Lansdale, Christ United Methodist Church is holding a concert benefit for Manna. It is these seemingly random choices by various groups that keep us going. It helps reinforce the fact that we don't do this work alone; it is really the community at large that makes our outreach possible.
Posted by Manna on Main Street... at 7:34 AM No comments:

I thought I would make a quick dash out the back door at Manna, but my path was blocked. An elderly gentleman was in my way. He wanted to get out as well, but he was stuck - he had pushed his walker up against the door in an attempt to leave. Unfortunately, the door was too heavy, or he was too weak, and he wound up getting his walker jammed in the door. He was unable to move in either direction. I manged to reach past him and push the door open, so he was able to move slowly down the ramp. While we strive to make Manna an open and welcoming place, sometimes there are physical barriers that get in the way...
Posted by Manna on Main Street... at 1:54 PM No comments:

When Doug first arrived at Manna on Main Street, he was angry. He demanded satisfaction. He had been in a serious accident and was in extreme pain. Doug fully expected us to fill his prescription for pain medication. We politely, but firmly explained that we don't do narcotics. If he had other medications for antibiotics, insulin or items of that nature, we might be able to help. Doug was not pleased and stalked away.

A couple of days later Doug was back, only this time a different man. He was apologetic and repeatedly told us how sorry he was for his behavior. Was there some way we could help him with his other medications. Choking back the tears, he thanked us for being willing to give him a second chance. We told him we don't take things personally and we understand how overwhelming life can be.

Doug returned a couple days after that. He had brought in his prescriptions... for his pain medication. We explained to him again that we don't pay for narcotics. We instructed him to go home and bring back the other prescriptions and we would see what they were for, and perhaps we could cover their cost.

After he left, we weren't certain - was he trying to play us, thinking that we were soft, giving him another chance and that we would give in to his demands? Or did he just forget what we had told him a few days earlier? We try not to judge his motives, but just be consistent with whoever comes to us for aid. It can be complicated when the same individual comes in multiple times, acting each time like someone else...
Posted by Manna on Main Street... at 9:15 AM No comments: