An article in the most recent issue of Newsweek caught my eye. The title was Generation Me and bemoaned that the 20-something generation today is more concerned with themselves and their own sense of self-worth than the world around them. The blame for this "epidemic" was fairly well distributed to parents, the media and the young people themselves.

I have difficulty buying-in to the premise. It certainly seems that young people today have a higher sense of self-esteem (not a bad thing), but what I see at Manna on Main Street is different. We have many young people who come in and fall over themselves in trying to serve our clients. I think about a young woman who recently graduated from a nursing program, found a job and is looking forward to when she can work second shift - so she can spend more time during the day at Manna.

Too, I have hope for the future. Wednesday evening a nine year-old girl stopped by with her parents. She had three bags of groceries with her. Instead of asking for gifts for her birthday party, she asked her friends to bring food to donate to Manna. Parties like this among young people are more and more common. I wouldn't write off this or any generation too soon...
Posted by Manna on Main Street... at 7:29 AM No comments:

Easy to say No

In his mid-30s, black and with a mental illness, David would hardly be the ideal "poster child" for an organization. When he is off his medication, which is pretty frequent lately, he can be scary. His rantings are often just on the edge of reality, so it can be tempting to ignore him and hope he will take his complaints somewhere else.

Still, we knew something funny was going on at his apartment. After talking with him a number of times about it, we were able to discern that he had not had running water for nearly a year. He had been hauling buckets of water up to his apartment to bath and flush the toilet. It turns out that the landlord was in foreclosure on the property and through a series of misunderstandings, the water service had been shut off. In the meantime, David had been faithfully paying his rent, hoping the situation would be resolved. He was also spending his own money to repair and renovate the apartment, and was consequently falling behind on his electric bill.

The situation finally came to a head, and David was told he would have to vacate the property; however, he didn't have any money for a security deposit or funds to pay off his past due electric bill. Even though Manna on Main Street would have to invest more than $1,000 to get David into a new apartment, we couldn't just look the other way. We are probably the only organization that could step in immediately and keep David from living on the street. We are hopeful that once he settles into his new place, he will return to his counselor and get back on his meds.
Posted by Manna on Main Street... at 8:08 AM No comments: 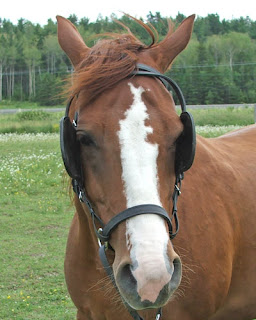 Manna on Main Street's vision is "that everyone might be fed." We focus on that each day. At the same time, we are not blinded to the fact that "feeding" people often goes beyond the realm of providing food.

Individuals who show up at a soup kitchen often have a long list of issues that are affecting them. We take the time to really listen to them and respond to those needs. At times it will lead us down a path of service that we were not envisioning. Paradoxically, those can be the times when we do the most good.

Perhaps in our own lives we can take off the blinders and broaden our vision of how we can help and serve.
Posted by Manna on Main Street... at 8:38 AM No comments: 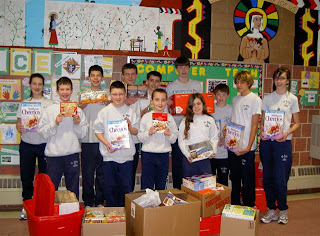 St. Rose of Lima students in North Wales conducted a food drive for Manna on Main Street and focused their efforts on breakfast and healthy snack foods. The Student Council representatives also helped load the boxes into the cars for delivery to Manna's pantry.

Each day Manna delivers 225 healthy snacks to the local Boys & Girls Club for the kids who participate in their after-school homework program. It is because of caring neighbors (including kids) that we are able to serve so many people in need.
Posted by Manna on Main Street... at 3:40 PM No comments: